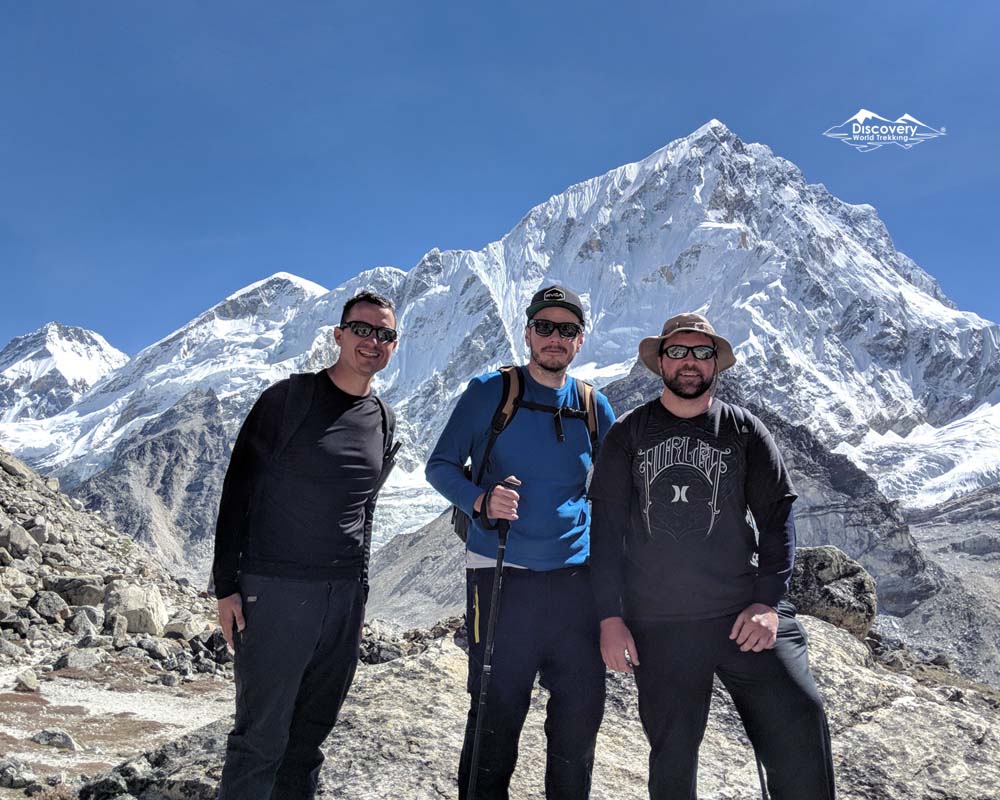 Nepal is one of the oldest nations of modern History. Commonly referred to as “Birth Place of Lord Budhha” and the land of Mt Everest, Nepal is a country full of snow-capped mountains and rich cultural tradition. Built with the foundation of “Unity in Diversity”, Nepal has a lot to offer when it comes to tourism. Recently an article published by National geography and Tripadvisor, Annapurna Base camp was listed as a “Once in a lifetime experience journey” whereas Everest Base camp listed as a “Must travel destination” in 2020. We, at Discovery World trekking, are serving tourism for more than two decades now, and with such experience, we’re making all kinds of trek/expedition safe, adventurous, and one of the most memorable moments of your life.

To date, we have organized more than thousands of treks with a 100% success rate making Discovery World trekking one of the leading trekking agencies of Nepal. With years of experience, we understand your motive for the journey and make sure your time in Nepal is as pleasant as possible. Today, we decided to give an insight detailed information about two treks which are one of the most famous destinations in the world. We’ll cover topics such as time, cost, difficulty level, highlights, preparation, food, culture, and many related topics to provide you all the necessary information to decide if you’re choosing between Annapurna & Everest base camp.

Days Required to Complete Everest Base Camp & Annapurna Base Camp

Annapurna Base Camp and Everest Base Camp both are Nepal’s jewels for the tourism industry and some of the most iconic tourist attractions. With very limited transportation facilities and difficult terrain, both journeys are quite remote in their own respective manners. Annapurna Base Camp trek is very popular among groups and solar travellers if only travelled to Annapurna Base Camp, the journey can be as short as 7 days but can go as long as 27 days. Annapurna also offers amazing destinations like Tilicho lake(One of the highest lakes in the world), Muktinath, and Thorong La which is better named as Annapurna circuit which can make the journey long but very interesting. Similarly, Everest Base Camp also has many things to offer but this trek is relatively more challenging than Annapurna Base camp. Unlike ABC, Everest Base Camp requires at least 10 days to complete the journey which also includes the flight. Breathtaking landscape and views of Mountains like Ama Dablam, Mt. Lhotse(8,516m), Cho Oyu(8,201m), and Mt.Makalu (8,463m), EBC has as many things to offer as Annapurna with Gokyo Lake(One of the highest lakes of the world: 5,000 m) too.

Discovery World Trekking offers a large variety of private and in group packages all around Annapurna & Everest Base Camp, Some of them are listed below :

Here, with Discovery World Trekking you can also create your own custom itinerary or trip using our trip planner.

How Difficult are Annapurna Base Camp and Everest Base Camp?

Whether you’re a frequent traveller or 1st time travelling, it’s no secret that trekking/ expedition requires some level of fitness. Generally, a trek that is above 5000m is considered challenging considering the landscape and the trails. Discovery World trekking has organized treks in Annapurna and Everest from all possible trails and with years of experience, we came to the conclusion that Annapurna Base Camp is relatively less challenging than Everest base Camp. To be more precise, Annapurna Base Camp consists of lots of villages in the journey which makes the trip easier and facilities are also easily available, whereas Everest base camp requires a flight from Kathmandu to Lukla and the real trek actually starts from Namche Bazar where elevation reaches to 5,500m in Kala Patthar. The trails in the EBC trek is off beaten and most part of the journey is untouched since it’s open for tourism. ABC trails are easier and consist of more ladders making the trip relatively easier than EBC. In Conclusion, Both treks require some level of fitness but the Everest Base Camp trek is more challenging comparatively than Annapurna Base Camp.

Note: Before going on any journey Discovery World trekking recommends doing a short distance walk and jogging to be prepared for the journey.

As you have already guessed, Annapurna base Camp can really be cheaper for short treks like Annapurna Base Camp Short trek which is about 7 Days long but if you consider choosing a more nearby destination in ABC trek like Tilicho lake, Thorong la, etc, The cost is quite similar for both of the trek.

As you can see in the table above, the cost of the Annapurna Base Camp trek goes from USD 460 to USD 870 depending upon the days required, Private/Group tours, and Extra personal expenses. So technically if you have a larger group, it’ll cost you relatively lower than a small group or private trek. Although we recommend choosing a private trek for family and large groups, you can choose for yourself. Whereas Everest Base Camp starts from USD 950 and goes up to 1470. It totally depends on how many days you want to spend on the trek and which packages you choose.

Food, Culture, and Highlights of the EBC and ABC Trek

Nepal is a country built on a foundation of Unity in Diversity and that’s what makes Nepal one of the unique countries to visit. While travelling ABC and EBC treks, you’ll encounter so many villages where people from centuries follow their cultural traditions. Mostly up there in the Himalayas you’ll Find Magar, Gurung, Thakali, Sherpa, etc ethnic groups of people.

It can really be a cultural exchange trip which travelling any mountains in Nepal. Like traditions, here people also have various food which they have been preparing for ages. Commonly you’ll find Dhal Bhat almost everywhere in Nepal but apart from those special foods which are only prepared by people living in villages like Namche Bazar, Pooh Hill, and other places are Poon Roti, Yak cheese, Thukpa, Soups and many more. It’s no secret, Nepalese cuisine. So, Basically, the food you’ll get in Annapurna Base Camp & Everest Base Camp is quite similar. However, The menu is a combination of traditional local, Asian, and western cuisine almost everywhere but as we go up close, the menu list will be shorted. We highly recommend liquids green tea, lemon tea, hot lemon, ginger tea, and garlic soup(must), etc. at high altitude and also the fresh vegetable items for health benefit. Tho plenty of non-veg items will be available we won’t recommend any of them because the meat in such places is not hygienic and healthy during the trek. We highly encourage you to avoid dairy and cheesy items and strongly suggest not to consume Alcoholic drinks, caffeinated items, hot chocolates as experts suggest avoiding such items during such high elevation treks.

Every journey has its own perks and in the case of ABC and EBC, we have many. Starting from Annapurna, This trek is recommended by 1000s of travellers all over the world. With a beautiful start from Pokhara Valley, the Annapurna Base Camp trek consists of Places like Pooh Hill (Hill station in Nepal 3,200m Elevation), Himalaya, Ghorepani, Bamboo which all are above 3000m, the landscape and views are astonishing and feel likes out of the world.

Similarly, we’ve Everest Base Camp, One of the most adventurous trekking packages where you will be a part of breathtaking sceneries of Himalayan ranges, Buddhist monasteries, Sherpa culture, and wildlife. With breathtaking sightseer attractions like the World’s highest airport in Syangboche, Exploration of the culture and lifestyles of the local Sherpa people, Along with Mt Everest (8848.68m )Astonishing Views of other peaks such as Mt. Lhotse(8,516m), Cho Oyu(8,201m), and Mt.Makalu (8,463m), the highest glacier on Earth- Khumbu Glacier (4,900 m), Ancient monastery in Tengboche. So much to offer, EBC truly is one of the most satisfying journeys to Make any time soon.

In conclusion, we can conclude that Annapurna Base Camp and Everest Base camp have their own perks and mostly can not be compared. However, if a decision has to be made, ABC is suitable for travellers who have limited time whereas EBC treks are slightly longer than Annapurna. Considering the reputation of Everest, Everest Base Camp is one of the classic and history-making destinations whereas ABC is full of temples and covers a larger protected area. In terms of cost, Everest Base Camp has more places to cover which makes the trip more costly than the ABC trek.

How different are Manaslu Circuit Trek and Annapurna Base Camp Treks?

While Mt Everest has been part of planet earth for 1000s of years, it's was 1st discovered to the west in 1852 by Radhanath Sikdar (an Asian mathematician and surveyor from Bengal who was the first to...

Everest Base camp trek in Nepal is by far the greatest expedition adventure of the World. Long hike into the mountain valley, you&rsquo;d feel like magic is real and miracles are alive on every moment...

Reasons to Travel Nepal in 2021